Turkey was my first venture into the Arab world and it was as vibrant as expected. 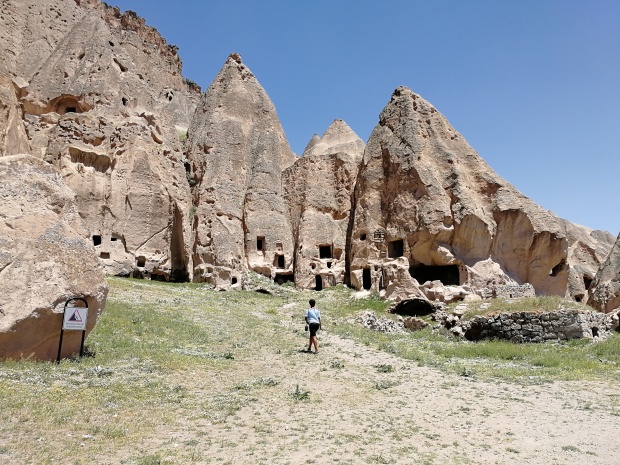 I aim to celebrate each birthday in a different part of the world and this year was not any different – I celebrated my last year in my 20s in Turkey! 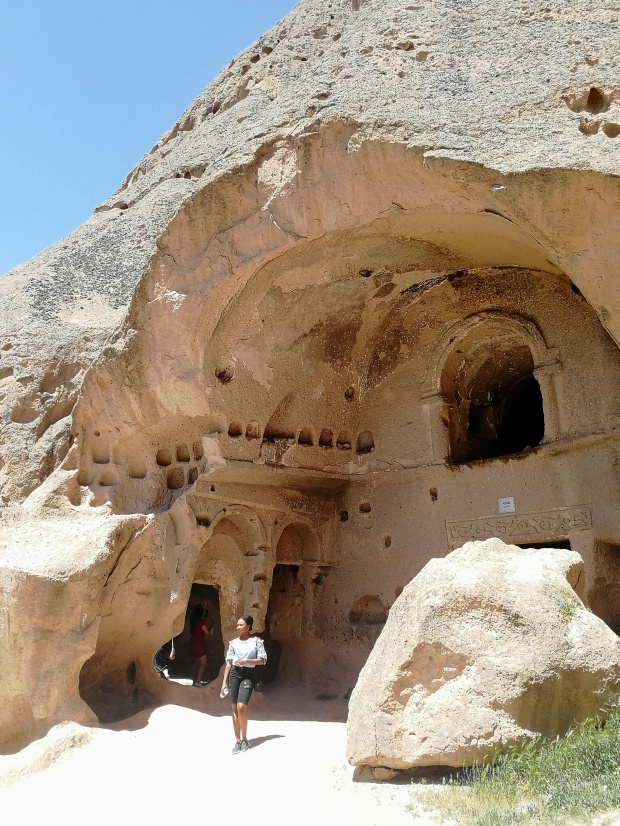 Istanbul has the buzz and hustle of most big cities across the world. I thoroughly enjoyed visiting the bazaars – I love markets. I usually hate crowds but I can abide the madness of a good market, I am after all a true Lagosian. Istanbul’s Grand Bazaar is apparently one of the biggest covered markets in the world. It is crammed full of stalls, merchants, their wares, shoppers and tourists. The Grand Bazaar has on offer a wide variety of things and I was especially taken over by the spices and teas! Everyauthentic market always has an abundance of merchants feverishly calling out for you, and it’s no different when at the Grand Bazaar. The only thing is the soliciting for customers turns weird when it happens to be three Black women (me and my friends) who are the buyers. The sellers, all men (I don’t recall seeing any female sellers) kept calling us various female African-American celebrities – from “Beyonce” to “Rihanna” 🥴. It’s getting old (was the same in Greece too). 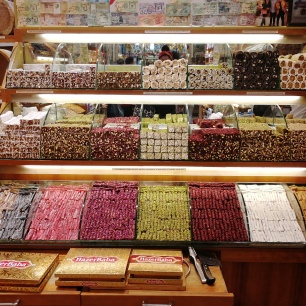 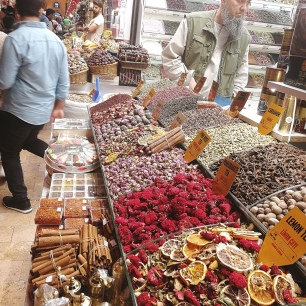 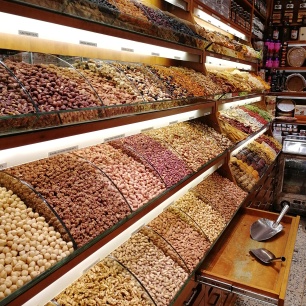 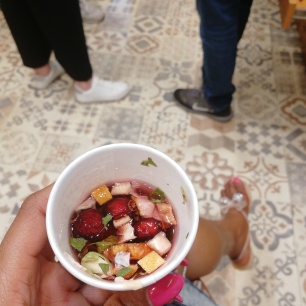 Something I highly recommend experiencing whilst in Istanbul is to take the 45min (about, there is a fast boat and a much slower one. We took the faster option) boat ride to Buyukada Island. It is the largest of the 9 Prince’s Islands. Its a serene dream! It has no cars except working vehicles like trucks, and I only saw a couple of those. The main mode of moving around especially for tourists is by horse and carriage. The houses are huge and terraced. There is greenery everywhere. It looked like what I imagine a Caribbean Island to be. Some people find the Island depressing and indeed it is an Island that feels trapped in time but I found it to be a respite from the bustle of Istanbul main land. 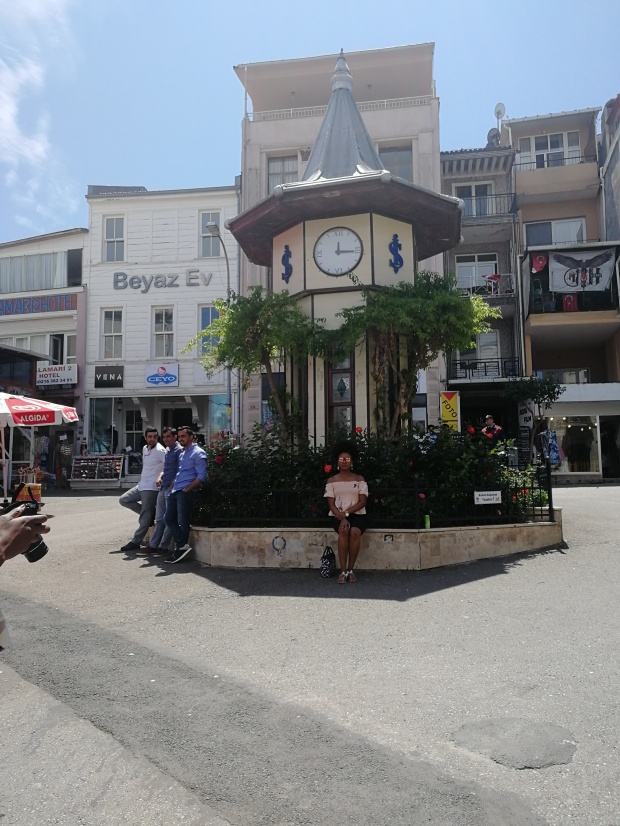 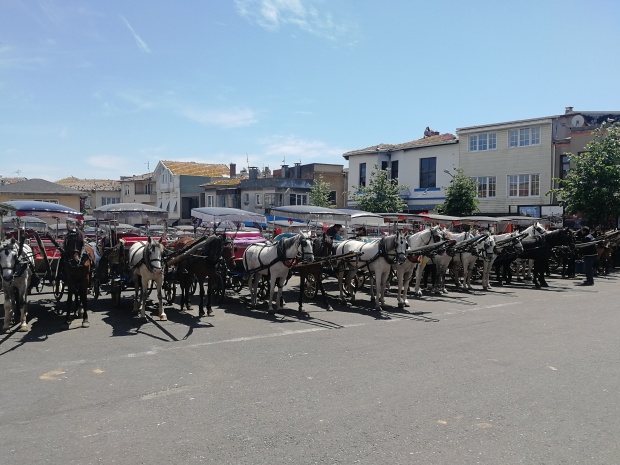 We also visited the Blue Mosque and the Hagia Sophia. The Hagia Sophia started out as a Greek Orthodox cathedral AD 537 and at that time was an architectural feat! The Blue Mosque seemed to be undergoing some sort of renovation when we went in May, 2019 but I still found it worth seeing. Especially memorable was me and my friend trying to sneak in with what is considered inappropriate clothing and being caught swiftly by one of the guards who yelled “dress problem!” I suppose we wouldn’t have gotten far anyways even if we made it into the mosque. Thankfully, there is a place nearby to rent long skirts and scarves for free. A more sensible approach is to plan ahead and wear a long skirt/trousers and bring a scarf along. That way you avoid having to wear borrowed, possibly rarely washed, oversized garments 🤷🏾‍♀️. 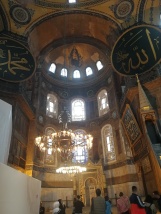 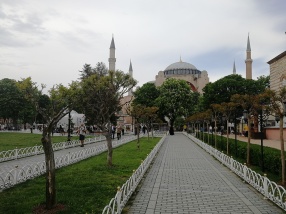 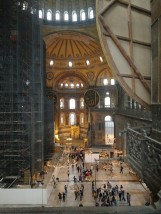 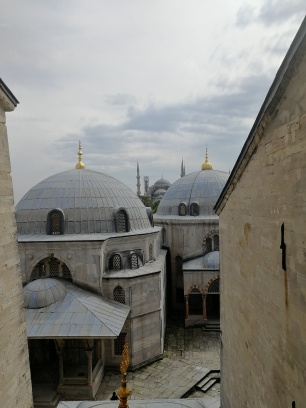 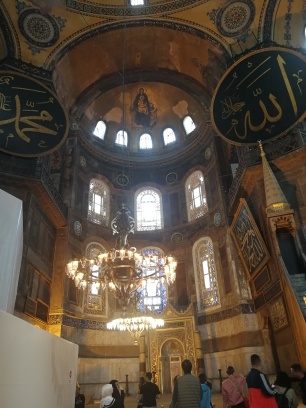 On one of the evenings in Istanbul we went on a boat cruise. It had belly dancers and whirling dervishes and a very fun MC. My advice with this is to pay more to go on a classier cruise. Ours, though fun, was a bit over-packed and the food could have been better. We saw other nicer and quieter boats pass by and wished we’d paid a bit more to go on one of those.

Also, we had a Turkish bath at one of the oldest Hammams in the city and felt like new people afterwards! There are several things you really must do whilst in Turkey such as having delicious Turkish delights and visiting bazaars, another must-do is having a Turkish bath, it is purely mandatory. This is the one we went to, which I highly recommend.

The highlight of my time in Turkey was in Cappadocia. Cappadocia is a semi-arid region in Turkey which is about half an hours flight from Istanbul. It felt like being on Mars… with scores hot air balloons (instead of space ships) floating around. For most people, Cappadocia would fit on their ‘World’s Remarkable Places’ list. Jutting out of the ground all over Cappadocia are conical natural rock/sand formations. It does make you feel like you have left planet earth. 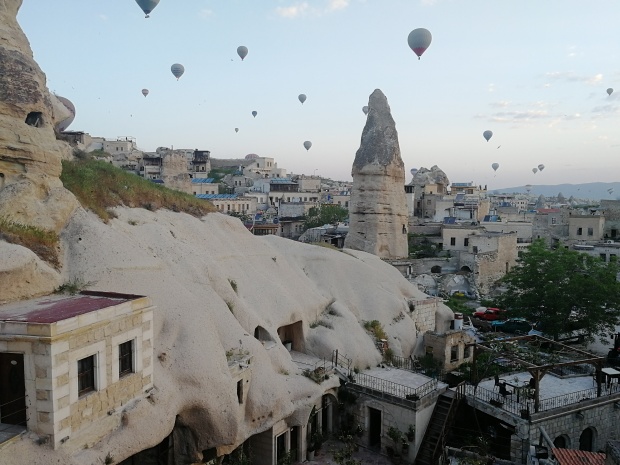 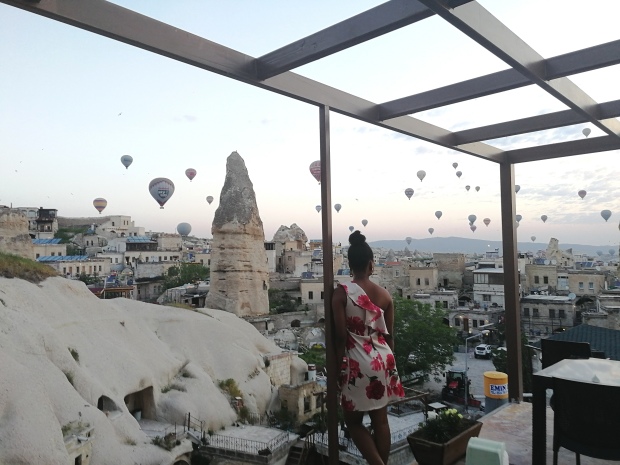 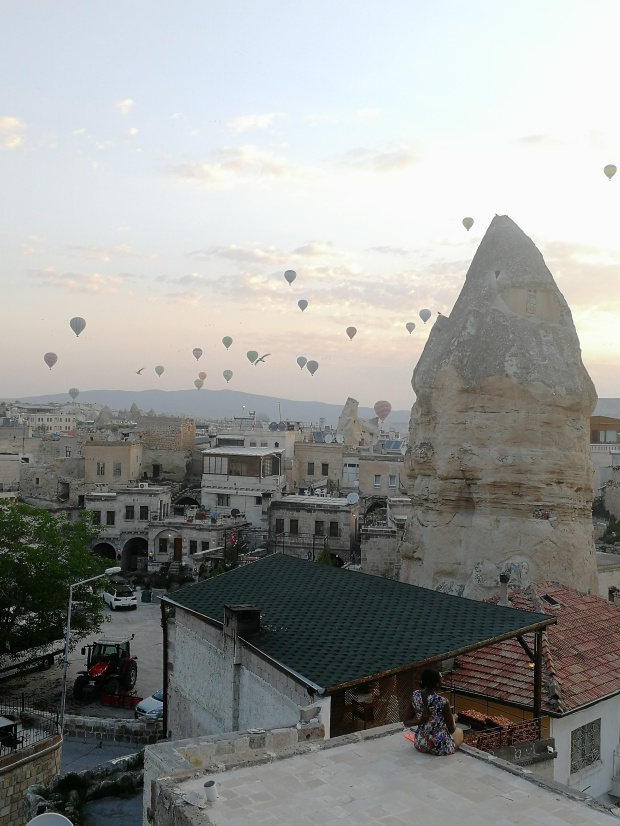 There are various tours of Cappadocia and there is quite a lot to see from sprawling underground cities that hid thousands of refugees to churches carved into rocks. The popular tours are named after colours and I went on the Green Tour which is a day tour starting at 9am and ending at 6pm. You are picked up and dropped off at your hotel. On this tour I went to the Goreme Open Air Museum, Pigeon Valley, a Turkish Jewellery shop (featuring the most beautiful precious and semi-precious stones), a gift shop (which I am sure the tour company struck some sort of deal with which meant they dropped scores of tourists at the shop everyday as an ‘opportunity to try Turkish sweets’) and Ihlara Valley. I actually spent most of my birthday trekking though the Ihlara Valley, which is the second largest canyon in the world. The trek ended in a restaurant selling not great food, but the outdoor seating by a long stream in the depths of the valley made it bearable. 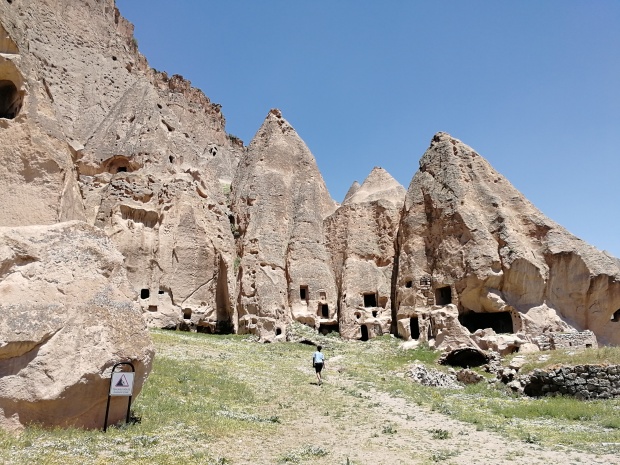 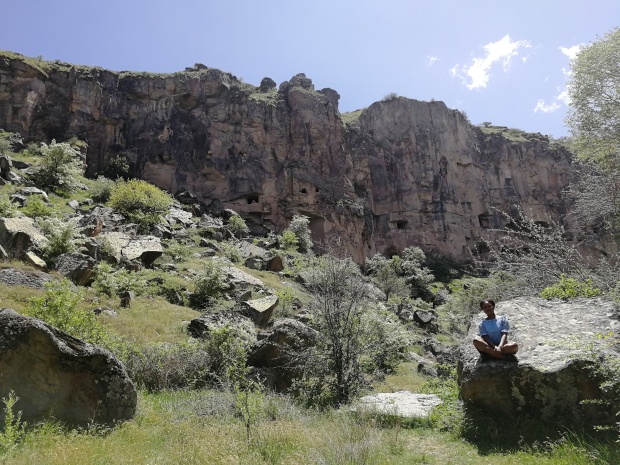 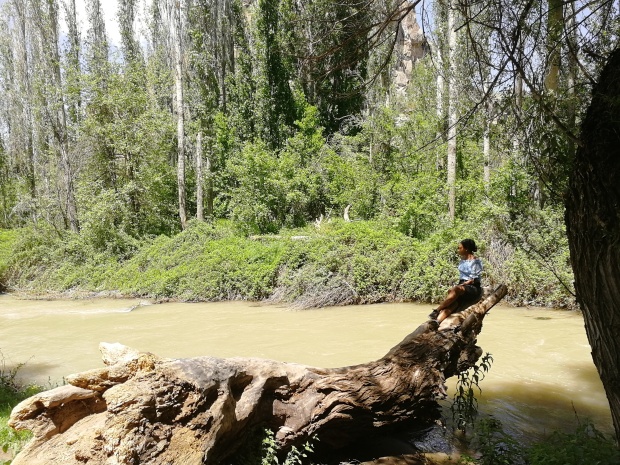 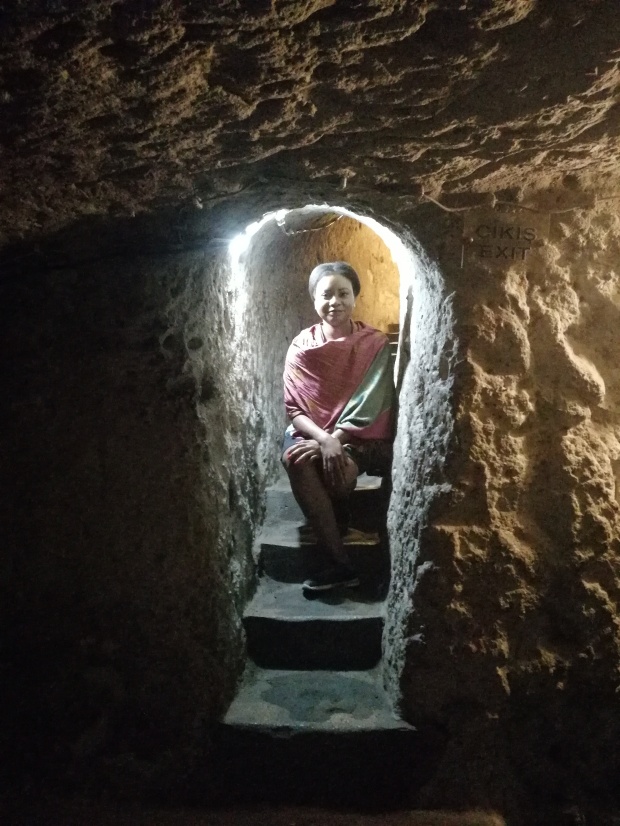 Cappadocia is very famous for its cave hotels and we stayed in one of them. Again, it was quite the experience, being shrouded around by cool rock walls in the belly of the caves (ok, I exaggerate, not really the belly of the caves like the photo above of me in one of the many underground cities, more like at the precipice of a cave…)but I found it quite calming and grounding.

Istanbul and especially, Cappadocia were a delight and Cappadocia really did feel like an outer-worldly experience. Turkey is truly a city offering many worlds; it straddles both Asia and Europe,  Christianity and Islam. It’s spices and teas are reminiscent of the east and empires long gone. It truly is an exquisite ride on a pendulum that swings in many directions. 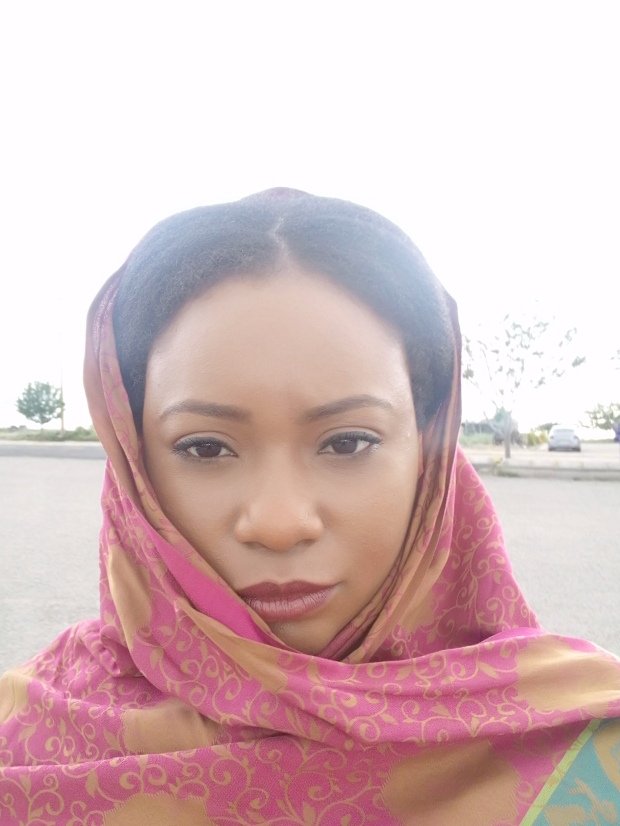